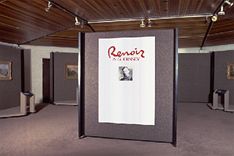 In 1883 the French Impressionist painter Pierre-Auguste Renoir and a group of friends spent slightly over a month in Guernsey and he painted some fifteen pictures of the island. These paintings have become scattered in both public and private collections across the world but the idea to bring a group of them back together for an exhibition in their island of origin gathered considerable local support. Sponsorship from the Guernsey tourism authorities not only provided financial support but their 1988 tourism marketing campaign was built around the slogan 'Holiday Guernsey - Renoir Did'. One of the artworks (Enfants au Bord de la Mer) was also used as a graphic device throughout the campaign.

The exhibition consisted of just six paintings. They were supported by a small number of contemporary photographic enlargements of Guernsey as Renoir would have seen it and displayed in a minimalist manner by local designer Robert Reed.  He also designed the 'Artists in Guernsey' booklet published to coincide with the exhibition and long since out of print. It illustrated all the known Guernsey paintings by Renoir and contained a scholarly account of Renoir in Guernsey by Dr John House of the Courtauld Institute.The text of the book is available to download as a PDF at the foot of this page.

Despite the fact that there were only six paintings involved, the Renoir name, the unique local connection and the focused tourist marketing combined to create a 'perfect storm' of visitors with attendance figures we have never come close to matching.