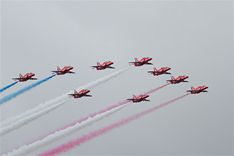 You may not expect to find information about an air display here but Castle Cornet is possibly the best place in the island from which to watch Guernsey's annual air show.

As the official Guernsey Air Display website states, the Island has enjoyed an annual air show in the month of September for over four decades. The Guernsey branch of the Royal Air Forces Association organises the display which is very much a charitable fund-raising event and heavily dependent on sponsorship by a consortium of local businesses for its continuation.

Watching the display is free but Castle Cornet Admission Charges Apply if you want to take advantage of its elevated position close to the display line. The aircraft perform along a north-south line off Guernsey's east coast and the Castle is pretty much at display centre.

The photographs on this page were all taken from the castle at the 2013 display. The weather was not very kind with low cloud forcing the aircraft to fly 'flat' displays for the most part and poor weather in the UK also prevented the planned attendance of the Battle of Britain Memorial Flight. However, the remaining acts all flew spirited displays and the Royal Air Force aerobatic team The Red Arrows ended the air show in fine style.