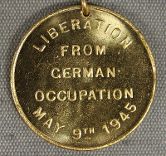 On now at Candie

A new display of information panels, objects and photographs at the Guernsey Museum at Candie tell the story of the German Occupation.  The objects and images all feature in a new introductory book to the Occupation of the Bailiwick written by Jason Monaghan.

The new book 'Occupation to Liberation 1940 to 1945: Guernsey, Sark & Alderney' has been specially produced to mark this year's 75th anniversary of the Liberation.  The display includes treasured toys owned by a child evacuee, a deportee and a child who lived in Occupied Guernsey.  There is also a home-made crystal radio set, a patriotic 'V for Victory' badge, wooden bookends carved by a German soldier and a Canadian Red Cross parcel.