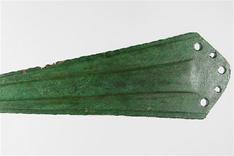 It is a metal made from copper and tin.  We think people in the islands began using bronze around 2000 BC.  Neither of these metals exist naturally in Guernsey, so they would have been brought here by merchants travelling by ship, possibly from Brittany and Cornwall. Archaeologists traditionally divide prehistory into the Stone Ages, Bronze Age and Iron Age, but it is likely that much the same peoples were living in the islands and over the centuries gradually adapted new ideas and new technology.

Bronze objects have been found in Guernsey, as well as pottery.

The most exciting collection of bronze objects was found in Alderney.  The hoard was made up of scrap metal, old axe-heads and spearheads. (A hoard is a stack or store of something valuable).  This hoard would have belonged to a metalsmith, who had collected the metal so it could be melted down and recycled to make new tools, weapons or brooches. We don't know why the owner never used the metal in the hoard.  It is a mystery.  Perhaps it was hidden to stop it being stolen, and the owner died before recovering it. Perhaps it was buried as an offering to a local god. There are several more such hoards from the Channel Islands, mainly from Jersey.

There is a type of pottery found on Bronze Age sites in Guernsey and it has a very peculiar name:  it is known as the 'Jersey bowl'. Pieces of these bowls were found at the site of the old Royal Hotel, St Julian's Avenue. Pottery is very useful to archaeologists.  This is because it can give clues about when it was in use.  The archaeologists are looking out for....

* the shape of a pot

* the material it is made from

People would have lived in tribes, with a warrior at the head of each tribe. Guernsey people were clearly afraid of attack, probably from across the sea. Ditches were dug and a bank was raised to cut Jerbourg headland off from the rest of the island. This created a safe area, large enough to protect hundreds of people and their animals. Remains of these ditches and banks can still be seen in the valley beside the Doyle Column and leading from there to Petit Port.  People were living there at the time the great temples of the Pharaohs were being built by slaves in Egypt. Sea levels had risen by this time to drown the forest at Vazon and Guernsey had reached something like its modern shape. Many old dolmens would have dotted the landscape, and some were still used in religious rituals.

* There is a small display on the Bronze Age at Guernsey Museum.

What comes next?  The Iron Age