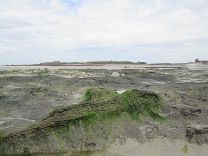 Where did Guernsey's first people live?

They may have lived on land which is now under the sea. Just off Jethou is a site which is underwater most of the year. Flint tools have been found here including blades made about 12,000 years ago from a period known as the Upper Palaeolithic.  At that date, the sea was about 125 metres lower than it is today and Guernsey was still attached to France.  A great river ran where the English Channel now stands.

How do we know this?

We have Archaeologists to thank.  They have investigated many of our ancient sites, sometimes by careful digging, often by just drawing or photography and making detailed records of what is found. The earliest local site wholly on land that has been dug by archaeologists is on Lihou Island. Modern humans lived there around 7,500 BC amid a forested landscape, making flint tools and eating a variety of foods including hazelnuts.  Experts also believe they would have fished with harpoons, hunted smaller animals and gathered other wild foods such as berries. Although we have no evidence for boat-building, these people must have learned to build boats as the sea rose and cut off Lihou from Guernsey.

* At certain times, peat deposits can be seen at Vazon Bay at low tide.  This peat represents woodland drowned by the rising sea after 5000 BC. Click here to see a newspaper report on the story.

What comes next?  The Stone Age