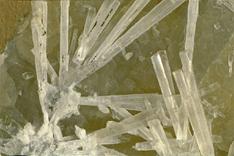 Our geological collection contains material from both the Lukis & Island Museum and the Guille-Allès Museum. The individual founders of these Guernsey institutions all had personal geological collections which reflects the popularity of the new science of geology in the nineteenth century.

The Lukis & Island Museum collections were in large part based on those of the Lukis family and in particular of Frederick Corbin Lukis (1788-1871). Although primarily remembered as an antiquarian, Lukis also had keen natural science interests and his 'Catalogue of Minerals...' has 901 entries. Not all the items listed would be regarded today as minerals, some are in fact fossils and many are rock samples which happen to contain a particular mineral. Where the distinctive paper labels with handwritten numbers still remain stuck to the specimens it is possible to match items with their original catalogue entries but sadly this is not always the case. Since the collection as we see it now has more than 3000 items it is clear that keeping up with documentation was just as much a problem in the 19th century as it is today.

The particular strength of the Lukis Geological Collection lies in the local Guernsey specimens obtained from quarries no longer accessible but which were active in Lukis's lifetime. Quarries working the St Peter Port Gabbro in the vicinity of the Bouett exposed mineralised zones with a range of species including Prehnite with the zeolites Analcime and Natrolite. Galena and Blende - the ores of lead and zinc respectively - were also found in the same area. Lukis clearly had arrangements with local quarry owners and workers who notified him of interesting mineral finds. One crate in the collection contained a large number of Calcite specimens, all clearly from the same local site - possibly Hamley's Quarry in St Sampsons.

Lukis' catalogue tells us that he received specimens from a wide circle of family, friends and correspondents. Thus from people with trading connections in the Baltic we find specimens of Scandinavian rocks and minerals, while his son John Walter being a mining engineer in France sent home lead minerals from Brittany. The fossil element of the collection is less well served in terms of evidence about its origins, though none of the specimens are local to Guernsey. While it includes a very representative selection of British and European fossils there is very little data about place of collection. While the items can be identified and their general geological age determined, the lack of detailed locality data seriously limits their scientific significance. Taken as a whole, however, the collection is an interesting social document of the interests and activities of a Victorian gentleman with an extremely enquiring mind.

Geological Material in the Guille-Allès Collection

Thomas Guille (1817-1896) and Frederick Mansell Allès (1818-1895) were childhood friends from Guernsey who joined the New York house-painting and decorating business of a fellow Guernsey émigré in the 1830s. The business prospered and they later took it over themselves but not before they had been inspired by the library facilities they encountered as apprentices and resolved to found something similar back in their native island. This they eventually achieved in 1882, followed by an associated museum which also bore their names. Thomas Guille, speaking as President of the newly formed Guernsey Society of Natural Science, said in 1885,

"...the Natural History collection of the late Mechanics Institution is now being transferred to the upper storey of this building, where it is intended to be placed permanently with my own and Mr Allès' private geological and mineralogical collections, as nuclei of what we hope will later better deserve the name museum".

The museum became a reality but very little documentation survives relating to the origin of those collections. The Mechanics Institution was founded in 1831 and we know that skeletal remains of sub-fossil Mammoth from Siberia were included and that such items are still present in the Guille-Allès collection. Similarly a large number of geological specimens from the United States - some with a small 'G' monogram in red paint - lead inevitably to the conclusion that they are from the private collections of Messrs Guille and Allès. However we do not know whether they collected themselves or purchased everything through dealers.

Apart from the labelled American material, the Guille-Allès Collection contains a similar range of minerals and European fossils to the Lukis Collection. One intriguing extra which was donated in 1889 by the Guernsey-born widow of Gilbert Hamilton (1803-1882) is a mineral collection with links to James Watt. Hamilton was in fact related to Watt by marriage and was a managing partner in the Birmingham Soho Works founded by Watt. The mineral collection was apparently gifted by Watt Junior to Hamilton upon the latter's retirement and there is some suggestion that it was originally owned by Watt Senior. While there is no definite link between the physical items and this recorded gift, a likely candidate for this collection has been identified within the Guille-Allès Collection.