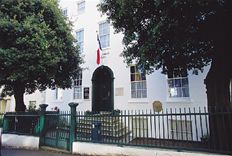 During his exile Hugo lived in Hauteville House, which has been preserved exactly as it was. Hugo's abundant creativity is displayed in the astonishing richness of its decoration. As Charles Hugo put it, the house is "a veritable three-storey autograph, a poem in several rooms".

The City of Paris preserves the two houses where Victor Hugo lived the longest: the Hôtel de Rohan-Guéménée in Place des Vosges in Paris, where for 16 years (from 1832 to 1848) he rented a 280 square-metre apartment on the second floor, and Hauteville House on the island of Guernsey, where he lived in exile for 15 years (from 1856 to 1870).

Victor Hugo was 30 when he moved into the Hôtel de Rohan-Guéménée with his wife Adèle and their four children, Léopoldine, Charles, François-Victor and Adèle. By this time he had already triumphed with his play 'Hernani' and enjoyed widespread success with his great novel 'Notre-Dame de Paris'. In the rooms overlooking Place Royale (today Place des Vosges) he would receive visits from Vigny, Lamartine, Béranger, Sainte-Beuve, Dumas, Mérimée, the Devéria brothers, Nanteuil and David d'Angers... It is in this apartment that he wrote some of his major works ('Marie Tudor', 'Ruy Blas', 'Les Burgraves', 'Les Chants du Crépuscule', 'Les Voix intérieures', 'Les Rayons et les ombres'...), along with much of 'Les Misérables', the beginning of 'La Légende des siècles' and part of Contemplations. During this period he became a member of the Académie Française, a peer of France and a member of Parliament; he met Juliette Drouet and married his daughter Léopoldine to Charles Vacquerie.

In 1851 the banned poet left France for an exile which would last 19 years.

On 16 May 1856, thanks to the success of his 'Contemplations', Victor Hugo bought Hauteville House in Guernsey, a large white building with a garden overlooking the sea. An enthusiastic collector of secondhand furniture and bric-à-brac, he brought back a profusion of chests, sideboards, carpets, mirrors, crockery, figurines and other objects from his excursions around the island. He put his boundless imagination to work on the house, spending months overseeing a major conversion on a medieval pattern, which gave this unique building an inner force and mystery. Hugo lived in Hauteville House until 1870, when he returned to France after the fall of the Second Empire, but he stayed here again for a year in 1872-73, for a week in 1875 and for four months in 1878.

In March 1927, the centenary year of the Romantic Movement, the house was donated to the City of Paris by the poet's descendants Jeanne, Jean, Marguerite and François.