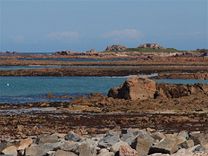 When did Guernsey first appear?

Guernsey's major rocks were born deep beneath volcanoes then crushed, twisted and cracked deep in the earth. Here is a little timeline:

400 to 500 million years ago - Guernsey was at the foot of a mountain range in a desert-like environment. Sandstone rocks in the north of Alderney are made from material that washed down from these mountains.

300 to 65 million years ago - Dinosaurs walked the earth. The rocks from this age have eroded in Guernsey, so we do not find their fossils here.  The Atlantic Ocean was only just forming at this time.

5 to 10 million years ago - Guernsey was on the sea bed, which explains why the top of the island around the airport and the top of Sark is now so flat.

Since then - this part of the Earth's crust has risen upwards, pushing the old sea bed 90 metres above the current sea level. Guernsey became an island.  Sea and weather sculpted the land into the shapes we see today.

Is it true that Guernsey was once connected to France?

Yes.  All the Channel Islands were once part of that landmass.   The islands have been separated by the sea levels rising.  Guernsey last became an island about 11,000 years ago.   Click here to watch an animation about Guernsey becoming an island.

Why does Guernsey have no toads, moles, squirrels, badgers, foxes or snakes?

Guernsey became an island before Europe had fully warmed up after the Ice Age, so many types of animals (and plants) never made it this far before the seas cut off Guernsey from Europe. Rabbits were only introduced here by man during the Tudor times.

There has been more than one Ice Age and these have been happening for the past 2 or 3 million years.  When the world gets colder, great sheets of ice spread out from the Arctic.  At times, ice covered most of Britain and was up to 1.5 kilometres thick (15 times the height of Guernsey's cliffs).  As the ice sheets grew, sea levels fell, leaving the Channel Islands as no more than hills in an arctic plain.  Guernsey would have looked more like Finland than the place we know today. When the world warmed up, the ice retreated and the seas came back again. Guernsey was at times as warm as Spain is now.

Will Guernsey always be an island?

Not necessarily.  If sea level continues to rise, it will make the islands smaller. One day in the far future it may fall once more meaning we will once again be connected to France.  It should be remembered that the ice ages have not ended. We now live in an 'interglacial', a warm period between ice ages.

Places to visit to see evidence of sea level change:

*  Castel Church is on top of an ancient cliff and the bottom of Rectory Hill was a beach 180,000 years ago when the sea was 30m higher than today.

* At Rocquaine you can still see the beach and cliffs from 150,000 years ago when the sea was 18m higher than today.

*  Beside the causeway to Lihou Island you can see an ancient beach from 100,000 years ago when the sea was 8m higher than today.

* The steep valleys of the islands were carved by rushing meltwater during thaws in the icy winters. These even extend under the sea!

What comes next?  Guernsey's first people....