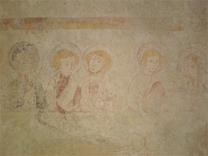 What we mean by 'medieval' times?

In this part of the world, it usually means the time period between the Norman conquest (1066) and the beginning of the Tudor reign (1485).  It is also known as the Middle Ages.

When England was invaded in 1066, Guernsey was on the winning side.  The Norman invaders would have spoken a Norman French very similar to Guernesiais, the language of Guernsey.   After 1066, Guernsey continued to be controlled by Normandy and became part of a realm that eventually stretched from the North of England to South Western France. By this time Benedictine monks had set up a priory in the Vale, and later on Lihou Island. The ten parishes of Guernsey were established during this time.

This is a very important date in Guernsey history.  It is to do with Guernsey being independent and part of the English Crown.  But what's it all about?  Let's look a little timeline.

933   Guernsey is part of the Norman empire, which stretches from Norway to Syria.

1066   The Norman Conquest.  William Duke of Normandy becomes King of England.  Guernsey,, following its rulers in Normandy, becomes part of the English Crown.

1028   By now, Guernsey had been divided into two large fiefs (areas of land) held by two Norman Seigneurs.

King John recognised the strategic importance of Guernsey and plans were made to build Castle Cornet on the rock at the entrance to the harbour.  At the same time sites such as the Chateau des Marais that had been mainly used as a refuge from pirates and local conflicts, were strengthened. The political separation of the islands from Normandy led to a series of continuous raids from the French and in 1294 the French attacked and killed 25% of the population of St Peter Port. The Bailiwick fell into French hands again in 1338 and Castle Cornet was taken on at least two occasions.  A local defence force, later known as the 'Militia' was set up but the island suffered until the mid 15th century as the raiders laid waste the countryside and attacked and killed scores of the population.

In the early 1300s the central market was moved to St Peter Port from the Castel and legal taxes were introduced to finance repairs to the harbour. The local economy relied on the wine trade and fishing and despite the loss of the markets in Normandy Guernsey continued to trade with Gascony. When Eleanor of Aquitaine married Henry II, her lands had become part of the English holdings and with the loss of Normandy goods from the Angevin Empire had to be brought along the west coast of France. This was ideal for Guernsey who was en route to the South of England. Trade was further helped by the privileges given to Bordeaux merchants.

Ships such as the 'Mary' were built in Guernsey. She was launched in 1415 and used to ferry troops to France for Henry V. Guernsey traders also obtained special grants from Henry VI of Castille for safe conduct within his domains. This helped to offset some of the problems Guernsey faced as French attacks on the island continued.

Owen of Wales, acting with French support, landed at Vazon in 1372.  His army defeated hastily assembled Guernsey forces near where the Castel School now stands.  Froissart's Chronicles gives an outline of the story, but the local ballad known as Ivon de Galles, ou la descente des Aragousais, embellishes this story considerably, and may even amalgamate the events connected with two invasions by the French.  Please find a copy of the ballad to download below.