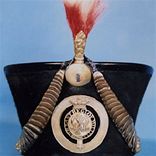 Some of the most impressive items are on display in our two Museums at Castle Cornet - the Royal Guernsey Militia Regimental Museum and the Royal Guernsey Light Infantry Regimental Museum. However a significant amount of additional material is also retained in our Reserve Collections. Numerous photographs of RGM and RGLI subjects are held. The majority of these photographs have been made available for viewing and research via public access databases on computers in both Museums.

Also held is a collection of items relating to British military regiments that were derived from Guernsey-men who have served in the British Forces across the globe over the past 200 years.

Guernsey Museums & Galleries maintains a small collection of objects which specifically relate to life on the island during the German Occupation. These include items made and used by the local population during this period when supplies to the island had been severely restricted. German weapons, uniforms, equipment and documents also feature. General civilian documents from this period are also held as are a collection of photographs of life on the island during this 5 year period.

No. 201 'Guernsey's Own' Squadron RAF Collection

The disbandment of the Squadron on 26th May 2011 as part of the Strategic Defence and Security Review brought into sharp focus the importance of maintaining the Squadron's Museum at Castle Cornet in St. Peter Port, Guernsey. Reflecting links forged between the island and the squadron in 1939, a museum was opened at the Castle in 1978 and re-opened in its current form in 2000. It continues to be a repository for objects, photographs and documents chronicling the squadron's life since its birth as No. 1 Squadron, Royal Naval Air Service in October 1914. Guernsey Museums & Galleries not only maintains the items within the Museum but also retains a considerable number of objects, documents and photographs in its Reserve Collections which also relate to No. 201 squadron.

Until such time as No. 201 'Guernsey's Own' Squadron RAF is reformed the Guernsey Museum Service is proud to maintain a public record of the dedication and service of the men and women who have formed part of the squadron's proud history.

The Museum has built up an impressive collection of weapons over the years.

Firearms from the mid-18th Century to the late 20th Century are on public display as well as residing in the Reserve Collections. The collection includes examples of the gunsmith's art from England, Europe and Asia.

The Museum also has an extensive collection of bladed weapons including swords, knives, axes, bayonets and some pole-arms. It also has a large number of ethnographic weapons including clubs, spears, bows and arrows, swords, shields and helmets. Examples from the native peoples of the South Pacific Islands, New Zealand, Australia, India, Japan, China, Africa and the Americas are currently held in the Museum's Reserve Collections.

Numerous pieces from the Weapons Collections are on public display in our Museums. These include the Story of Castle Cornet, The Maritime Museum, The Royal Guernsey Militia Regimental Museum, The Royal Guernsey Light Infantry Museum, No. 201 'Guernsey's Own' Squadron RAF Museum and Guernsey Museum & Art Gallery. Numerous other items are currently held only in the Reserve Collections for research and future display.