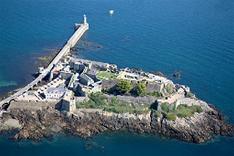 Who were the Normans?

They were people from Normandy. From Guernsey, we can see the coast of Normandy from Guernsey on a clear day.  Normans were originally Vikings from Scandinavia and at its heyday, their empire stretched from there to Syria.  We usually think of the Norman period being from 1066 until the start of the Tudor reign in 1485.

Why do we remember the Normans?

The Normans are most famous for the Norman Conquest of England in 1066.

Did you know?   The Norman invaders would have spoken a Norman French very similar to Guernesiais, the language of Guernsey.

When the Conquest happened, Guernsey was on the winning side.

Because Guernsey was part of the duchy of Normandy (from the 10th century until the early 13th century).

The people in Guernsey enjoyed the same customs, laws, language and traditions as those in Normandy.  We were Norman.  Ordinary farming folk were mostly poor and made extra money by knitting.  By the sixteenth century, even Queen Elizabeth's household were wearing Guernsey stockings.

Benedictine monks had set up a priory in the Vale, and later on Lihou Island. The ten parishes of Guernsey were established during this time.  Norman lords and Norman abbeys held fiefs in the islands.

Did you know?  A fief is an area of land.  They have been in Guernsey since Norman times and still exist today.  The most important person in each fief was the Seigneur'.

Merchants lived in St Peter Port, which was an important harbour. Ships  stopped here between France and England, often taking Gascon wine to England.  (Gascony is in western France but was ruled by England in those days).  Read more at our medieval life in Guernsey page.

What language did they speak in Guernsey?

Guernesiais, the native language of the island.  It is a form of Norman French.  For more information visit our language page here.

Did the Black Death come to Guernsey?

Yes.  It struck the island severely in Guernsey in 1348.

Where can I visit in Guernsey to find out more about Norman Guernsey?

- The priory in Lihou was founded in the 12th century (1100s).  The ruins have been excavated by archaeologists and can be visited.  You can find the site sign below.

- Castle Cornet was built in the 13th century (1200s).  Challenge yourself to find the location of the original medieval tower, known as the Tour Carré.

- St Apolline's Chapel in St Saviours was founded in the 1300s and is free to visit.  Inside you can see a beautiful wall painting of the Last Supper.

- Many Guernsey placenames have their roots in Norman language.  For example:

*  éperqueries = a place to dry fish

The Story of Guernsey by Jason Monaghan