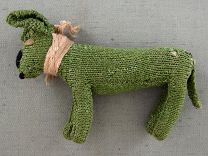 Guernsey and the other Channel Islands were occupied by German Forces during the Second World War.  In this section you will find:

Guernsey Occupied - this is a past exhibition about the occupation in general. It gives a good overview in different sections from invasion to liberation.

Children of the Occupation - a past exhibition about the occupation, told by people who were children at the time.

Click here to visit Occupied Behind Barbed Wire - a past exhibition about islanders deported to prisoner of war camps in Germany.

Occupation newspapers - copies from the collection.

Red Cross Messages - includes some examples from the collection.

Here are just a few FAQs about the occupation.

How did the occupation come about?

British and French armies were fighting Nazi Germany and had a stunning defeat in May 1940. France surrendered to the Germans and was occupied by their armies, allowing Luftwaffe aircraft to set up bases on the French coasts. This meant that the Channel Islands could not be defended, so British troops withdrew and the islands were 'de-militarised'. This became clear to the enemy too late.

Did the Germans invade?

The German army drew up plans for an invasion of the islands but, on 30th June 1940, a pilot from the Luftwaffe landed his plane at Guernsey airport and found that the island really was undefended.  Tragically, the Luftwaffe had bombed St Peter Port harbour two days previously.  Thirty four people were killed and there is now a monument to commemorate them at the White Rock. Guernsey surrendered to the invaders on 1st July.  For the rest of the war, the islands were occupied by the enemy.

People in Guernsey were given the option to evacuate to England.  Seventeen thousand people were evacuated from Guernsey and 25,000 were left behind.  All but a handful of people from Alderney were evacuated.

Did Guernsey people try to fight back?

We suggest this online resource for extensive information about resistance during the Occupation: www.frankfallaarchive.org

Armed resistance was out of the question in such a small place, when there was one soldier for every two islanders. Those who dared defy the Germans were sent to prison camps and three Jewish women were taken away by the Nazis and died at Auschwitz. Two Guernsey-born soldiers sent here to spy only just avoided being shot when the German commander von Schmettow decided they should instead be treated as prisoners of war.

Radios were confiscated and people were banned from going on the beaches. Fishing boats could only go out with a guard aboard to stop the men escaping. Guernsey however escaped most of the cruelty and destruction suffered by other countries in Europe. Adolf Hitler wanted to use the Occupation of the Channel Islands to show the British people how civilised the Germans could be. Some soldiers were relieved to be in a place where there was no fighting and some even came back after the war was over.

Things became darker as the war dragged on. Everyday things like bicycle tyres and children's toys were impossible to find. Food became in short supply and the crime rate increased. In June 1944, the Allies invaded Normandy and began to recapture France. From that point on the Germans in the island were cut off, as was the supply of food, coal and medicines. In the winter that followed, both the islanders and the occupiers were close to starvation, even eating seaweed. Only the arrival of Red Cross food parcels on board the ship 'Vega' saved them.

What did the Germans do?

They adapted the island to their needs.  The Germans were determined that the British would not recapture the Channel Islands.   They brought in up to 37,000 soldiers with artillery, aircraft, ships and tanks. We can still see (and sometimes visit) the concrete bunkers, trenches, towers and artillery positions they built around the island.  Slave labourers from Russia, Europe and even Africa were used to build these fortifications and many died of ill-treatment. The fortifications were however never needed. The British only launched a few small attacks on the islands using commandos and bombers, mainly aimed at annoying the Germans and finding out information. A big invasion was planned, but fortunately never carried out as Guernsey would have been left in ruins and lots of its people killed.

Is it true that people were deported?

Yes.  During 1942 and 1943, some 2,000 Channel Islanders were deported to camps in Germany.  Guernsey deportees mainly went to Biberach, and sat out the war behind barbed wire.

When did the occupation end?

On 8th May 1945 the war in Europe ended and the British sent HMS Bulldog to Guernsey to receive the surrender of the German forces. On May 9th, British soldiers from 'Force 135' landed and took back control of the island. The Occupation holds an important place in the minds of islanders and May 9th is now celebrated as Liberation Day.