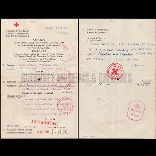 During the Occupation, the only legal form of communication with the outside world was via the Red Cross. The organisation provided message forms on which islanders could communicate with family and friends who were outside the island. To ensure that the service was maintained for humanitarian reasons, both sides agreed that all messages would be read by both German and English censors. This was to ensure that no secret military or coded information was being sent via the forms. They were intended for non-military, civilian messages only. The authorisation stamps of both the German and English censors can be seen on the message forms indicating that they have been read and passed fit to be sent on.

A Red Cross message was initially restricted to only 10 words, but this was later increased to 25. The first message in any communication was usually typed on the form. The reply would generally be hand-written on the back of the form and returned. Messages took anywhere from between a few weeks and several months to get from the island to England and back again.

We look after several Red Cross Messages in the collection and we have added some here for you to read.  They are from two different families:

The Falla family was split up by the evacuation. Their Red Cross Messages tell us that Gerald Falla remained in the island whilst his wife, Frances-Lily Falla evacuated to Lancashire with their three children - Roy, Mavis and Jean.

Gerald's, and possibly Frances', own parents remained in the island and are referred to in some of the messages.

Gerald and Frances write to one another via the Red Cross.

Mrs Ethel Leicester was the daughter of Mr F.J. and Mrs C. Jeater. Ethel was married to James ( Jim ) Leicester and they had a daughter, Veronica. Ethel and her family had remained in Guernsey when the German Forces invaded. However, her parents the Jeaters, evacuated to England. They took with them their other daughter, Ethel's married sister, Mrs Dorothy Davies. She had a young son Peter who accompanied her. They all lived together at the same address in Shropshire and Ethel writes to them both via the Red Cross.

Many Guernsey families were separated by the evacuation that took place in advance of the invasion of the island by the German Forces in 1940.

When it was realised that a German invasion was imminent, on the 19th June 1940 hurried official notices appeared in the local newspaper. These announced that school-age children would be evacuated with their schools from the island and that parents should prepare their children for departure. Teachers would accompany their classes, along with classroom assistants and any mothers who wished to volunteer. In the end, around 500 island mothers travelled with the school children and became teaching assistants for them in England. Parents had to register their children for departure with their school that same evening and then prepare a single suitcase for them which they would leave the island with the next day. In this exodus, a total of 5,000 Guernsey school children were evacuated.

In addition, children below school-age could be evacuated with their mothers and were given priority on the first evacuation boats.

Men of fighting age, particularly those with military service experience, or those who had been in the Royal Guernsey Militia or Elizabeth College Officer Training Corp were also given priority on the early evacuation ships. This was so that they could go to England and join British Army regiments and enter the war.

Passenger steamers and cargo vessels were diverted to the island and spent the following several days evacuating islanders. Twenty five ships left Guernsey with evacuees on board on 21st June alone.

In total, approximately 17,000 people evacuated from the island before the evacuation ships stopped running on 23rd June 1940.

With the evacuation of all school-age children along with young children and their mothers, many families were split up. In addition, many people worried about what would happen to their properties, houses and belongings when the German Forces arrived. Much soul-searching led to many men deciding to stay in the island whilst their wives and children evacuated to England. Some hoped to join their families on a later boat, but were left stranded when evacuations ceased.