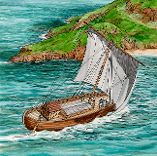 Did the Romans come to Guernsey?

Yes.  We believe the Romans came to Guernsey because we have a safe harbour here.  Roman ships would have been travelling over the sea carrying wine, olive oil and other goods around the empire.  The safe harbour here offered them a stopping-off point between Britain and Europe.  Romans in those days travelled on ships with large sails, powered by the wind.  Travelling by sea could be dangerous and sailors liked to stay close to land.  The salt that was made here would have been valuable for preserving food on long voyages. Some of the cargo would be sold or exchanged in the town, including Roman style pottery and fine goods. Large storage jars known as amphorae have been found that once carried wine, olive oil, fish sauce and other expensive
foods.

Were there Roman soldiers living in Guernsey?

We don't have any evidence of this... yet.  There is a Roman fort in Alderney called 'The Nunnery' but we have no proof that there were Roman soldiers there.

For many people, life would have continued much as it did before we became part of the Roman Empire.  There was a small town in St Peter Port, although we do not know what it was called.

Has anything been found from Roman times?

Yes.  Archaeologists have discovered several Roman sites and here are some of them:

* La Plaiderie (opposite Christies café in the Pollet, St Peter Port) - there was lots was found here, including a carefully-buried pig skeleton.

* The wreck of a ship nicknamed Asterix (found in the 1980s in the mouth of St Peter Port harbour).  We do not know the real name of this ship.

* Underneath the Markets in St Peter Port, in an area called the bonded store.

* Near Castel Church - there may have been a large house, villa or even a fort here.  Castel Church has Roman tile built into its walls.

- Guernsey Museum, where there is a section about Roman Guernsey with objects on display.

- Guernsey's Roman Ship is on display in open storage.  Please note that this is just a store.  It is housed next to Guernsey Pearl at Rocquaine and is free to enter.