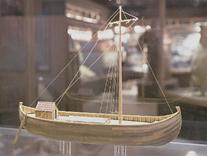 Guernsey was the final resting place of a Roman ship which caught fire and sank in the late third century AD (around AD 280). Remains of the ship have been excavated and preserved. The main timbers are in a store at Rocquaine (opposite Fort Grey, next to Guernsey Pearl) and can be seen via a viewing window. It is an ambition of the Museum to ultimately re-assemble the ship and put it on display.

The ship was famously found by local diver Richard Keen on 1982. Its timbers lay half way between the pierheads of St Peter Port harbour. It was raised and recorded between 1984-87 by the Guernsey Maritime Trust when it faced imminent destruction from the propellers of car ferries and dredging. The project was led by Dr Margaret Rule who also led the excavation of the Mary Rose. She published the excavation results together with Dr Jason Monaghan, who became Director of Guernsey Museums two decades later.

Following an offhand comment by a schoolboy, the ship was nick-named "Asterix". This name is still used colloquially but we do not actually know the name of the ship or anyone who sailed on her. By coincidence, a Roman waterfront site at La Plaiderie was excavated by Bob Burns of Guernsey Museum during the same period. Until this double find, there was very little to indicate that the Romans even came to Guernsey.

The ship dates to the late third century, which was a turbulent time in this corner of the Empire. Some 18m of the bottom of the ship survives, of an original 22m+. It has a maximum beam of 6m and the remains stand around a metre high from the keel.

It was constructed in a Gallic or Celtic manner using heavy oak timbers fastened by massive iron nails as thick as a man's thumb and as long as an arm. The timbers were butted together without jointing and were assembled frame first, unlike many Mediterranean ships of the time which were built skin first. Gallic vessels which sound remarkably similar were described by Julius Caesar almost four centuries earlier when he was fighting the Veneti off the coast of Brittany. It is therefore more accurate to call this a 'Romano-Celtic' ship.

This is the largest and most intact example of this class of vessel known, the others being Blackfriars I found in London in the sixties and the more recent Barlands Farm boat. As it was found in Guernsey, ours was undoubtedly a sea-going vessel, whereas the smaller examples may have been limited to river or estuarine work.

In the Roman era there were probably few developed harbours in the region and ships would have had to beach to unload cargoes or shelter from the weather. The ship was clearly designed for waters such as these, which have a high tidal range and strong currents.

The ship caught fire and sank around AD 280. It was carrying a cargo of pitch in its aft hold, which must have made a merry blaze. This would have been a major incident in third century Guernsey and we can only imagine the crowds on shore watching the spectacle. Fortunately for the archaeologists, the pitch melted and trapped objects including tile from what appeared to be its galley plus pottery and coins. The pitch set hard when the ship sank and helped to keep the wreck together and preserve its detail. So good is the preservation that we can still see the marks of tools, including the scratches made on the keel when the shipwright was first laying out the boat. Deep in the bilge we even found trapped food remains. Pottery from as far apart as Algeria and Germany was on board. All this suggests that our ship may have been a coaster, engaged on what the French call cabotage, carrying cargoes of opportunity from port to port.

Two intriguing finds were a pair of cast bronze bearings which are thought to have been from the bilge pump. They show the hybrid nature of our vessel - a thoroughly Roman piece of engineering fitted into a Celtic style craft.

Margaret Rule described the ship as "the most important and unique piece of maritime history" for Guernsey. This is Guernsey's largest ancient object, and possibly the largest surviving object from Roman Britain. It demonstrates that St Peter Port played a role in the trade networks one thousand six hundred years ago. Guernsey played a part in the Iron Age Atlantic wine trade and as far back as the Neolithic objects from France were coming here by boat. This ship is part of Guernsey's long history as a waystation, entrepot and harbour of refuge.

Our ship is the largest and most intact example of its type and one of the oldest European sea-going ships found outside the Mediterranean. Gallic in origin, both its sinking and its survival in Guernsey's harbour are twists of providence. It is not just of local interest but is part of the history of maritime Europe.

BBC2 screened a documentary "Operation Asterix" in 1985 and in 2010 it featured on "Digging for Britain". Plans to conserve the ship in Guernsey stalled, so in 1999 the States of Guernsey sent the ship timbers to the Mary Rose Trust in Portsmouth to be soaked in water-soluble wax (PEG) and freeze-dried. This process came to an end in 2011 and the timbers were returned to Guernsey in 2015.

Guernsey's Roman ship now has a temporary home in the building next to Guernsey Pearl, near to Fort Grey Shipwreck Museum. The main timbers can be seen through a viewing window and a small display explains more about the ship, how it was built and how it came to sink off Guernsey. The ship store is open the same hours as Fort Grey and it is hoped Guernsey Museums will be able to create a full exhibition of the ship in the future. Updated February 2018.

A Gallo-Roman Trading Vessel From Guernsey, by Margaret Rule and Jason Monaghan is available for purchase from the Museum shop.