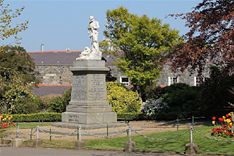 The Memorial depicts two figures representing a soldier leaning on his rifle and standing guard over a wounded comrade.

The funds for the memorial were raised by the Guernsey Patriotic Demonstration Committee, starting with a concert held on 1st December 1902 which raised £40. On 22nd May 1903 at a meeting of the Memorial Committee the site at St Julian's was agreed on and a design submitted by a Mr Newbury was approved. The cost was estimated at £250 of which £200 was already in hand. The cost of the site and the erection of the statue was to be a further £330. This money was raised by public subscription. The site was finally approved and permission to erect the memorial was granted on the 9th September 1903.

The granite for the base was obtained from Grand Camp quarry, Vale and the two Carrere marble figures, representing a soldier standing over a wounded comrade were sculpted in Italy.

The memorial was finally completed on 23rd May 1905. It is 18ft 9in tall, weighs 25 tons and bears the names of the 11 officers and 34 men who fell in South Africa. After completion the memorial remained shrouded in canvas until the unveiling by the Duke, except for one occasion when some practical joker cut the canvas off.

Unveiling of the Memorial

On the 23rd September 1905 the Duke of Connaught, the Kings brother and Inspector General of the Army, arrived in St Peter Port aboard the cruiser Monmouth at 9am. St Peter Port was decorated with banners, lanterns and artificial flowers. The militia was out en masse with a guard of honour at Prince Albert Pier, soldiers lining the quay, North Esplanade and St Julian's Avenue.

Just after 10am the Duke arrived in a steam pinnace and landed on the slipway. He was greeted by the Lieutenant Governor Major General B B D Campbell and escorted to a special dais which had been erected on the pier. Sir Henry Giffard the Bailiff welcomed him. The Duke said that he enjoyed returning to the island. He had previously visited in the 1850's with his father.

After inspecting the guard of honour from the Manchester Regiment the party were escorted by officers and men of the Royal Garrison Artillery with the streets lined by troops of the Royal Guernsey Artillery and Engineers, 1st and 2nd Regiments Royal Guernsey Light Infantry and the Elizabeth College Cadet Force as they proceeded in the Lt. Governors carriage through the crowds to the top of St Julian's Avenue.

After unveiling the memorial, The Duke inspected the Militia Artillery and Engineers at the town arsenal. In the afternoon inspected the 2nd Regiment Royal Guernsey Light Infantry at Beaucamps barracks. He presented Militia long service and good conduct medals to five militiamen. That night St Peter Port streets were packed with people marvelling at the decorations lit with Japanese lanterns.

On Sunday morning the Duke attended the Garrison Church parade at St James-the-Less. The following day the Duke inspected the artillery at Castle Cornet and the garrison at Fort George. On the Tuesday the Duke visited Alderney, inspected the Militia and presented another 23 long service medals before departing once again aboard the Monmouth.

The memorial is a Protected Monument.

The inscriptions on the memorial read:

On the West face:

To the memory of
the Officers and Men belonging to
Guernsey and Alderney,
who laid down their lives for their country
in the
South African War
1899 - 1902

On the North Face:

On the East Face: