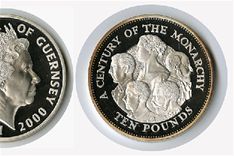 The Museum possesses a collection of well over 2000 coins. A significant percentage of the collection comprises examples of Guernsey mint coinage from the 19th Century until the present day. Commemorative coins of both Guernsey and UK mint have also been collected.

The collection also contains a large number of coins from around the world with examples dating from the 17th Century onwards. Worldwide coinage includes French, English, American, Irish, Asian, Canadian, Caribbean, Maltese, Japanese and many others.

A significant body of much earlier coinage from archaeological excavations including numerous Greek and Roman examples from various periods is held in the Archaeological Collections. These coins have been excavated both on the island as well as at other locations across the globe.

The Numismatic Collection also features an appreciable amount of paper currency from various periods. Paper Money issued by both the States of Guernsey and the German authorities during the German Occupation 1940 - 45 is also held.

The collection includes examples of local Guernsey stamps and postal history items from the late 19th Century to the present day. There is also a small, yet important, number of letters from the 18th and early 19th Centuries that were sent to and from the island in the period before 1840. These bear the marks and stamps of the couriers and ships that transported them and are a fascinating glimpse of how letters and messages moved back and forth in the days before stamps were introduced.

All issues of First Day Covers for the Bailiwick of Guernsey since the early 1970s have been included in the collection.