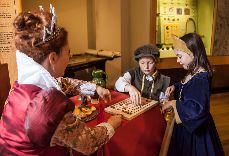 The Tudor period (1485-1603) was a time of great upheaval in the Bailiwick as the Islanders struggled to fit in with new laws being made by the Kings and Queens of England.  When Henry Tudor became King of England in 1485, people in the Bailiwick still spoke Norman-French, followed many of their own laws and lived their lives according to the teachings of the Catholic religion. The Parish Church was the centre of the community and a crumbling Castle Cornet guarded a safe harbour full of ships trading between England and the coasts of France and Spain. The time was relatively peaceful because, in 1481, a special agreement was made that the Channel Islands should be neutral in times of war between England and France.   This agreement was called a Bull of Neutrality and it was issued by Pope Sixtus IV.

At the beginning of the Tudor period Guernsey was divided into 10 parishes just as it is today. The most important building in each parish was the church. Most people stayed within their parish. The names on old documents show that they worked, played and married others who lived in the same parish. Some people probably only went out of their parish to visit the market and that might only be once or twice a year.

What about the other islands?

Alderney had just one town, St Mary's (now called St Anne) towards the middle of the island where there was fresh water and better soil. There was a small harbour at Longis Bay and a few cottages around the coast. Not many people lived in Sark, Herm and Jethou. Many of the people who once lived in Sark had died or left around the time of the Black Death (1348). Only pirates and fisherman visited Sark until 1565 when a 'plantation' (a group) of Jersey people settled there to stop the French taking it over.

Who was in charge?

The Kings and Queens of England granted Charters (special documents) to confirm that the Channel Islands had special rights and privileges.  They also appointed a Governor to the Islands but as he rarely lived in the Bailiwick, his deputy, the Lieutenant Governor, a Bailiff and a group of twelve important local men called Jurats actually ran them. The Jurats (judgement finders) were chosen by the community and met in the Royal Court to make sure that the islanders followed the laws. The Dean of Guernsey had a separate court that dealt with the laws of the church.

What is a Fief?

An area of land.  Since Norman times (1000s -1200s) parts of the Bailiwicks of Guernsey and Jersey had been divided into Fiefs. The King could give a Fief to a supporter who then became the Seigneur of the Fief. The Seigneur collected 'rentes' from all those living in his Fief. People on some Fiefs also had to pay other taxes such as the 'poulage'. Each household had to give 2 chickens to the Seigneur each year.

Is it true that there were gruesome punishments in those days?

Yes, some were very cruel.  For stealing and begging, you could be hung from a gibbet, whipped around the town or have an ear cut off and nailed to the pillory.  Sometimes people were given more than one punishment.  For scrumping apples, dancing on a Sunday or joyriding (on horses) you could be put in the stocks or hung in a cage. These were placed in the market place (near the Library) on Saturday mornings. People jeered and threw rubbish and animal dung as they did their shopping.

The real story of Catherine Cauchés and her daughters is particularly sad and tragic.  They were strangled and burnt alive for not following the Catholic religion of the time.  There is more information below under 'document downloads'.