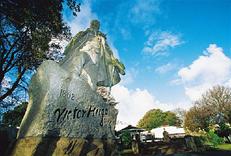 Victor Hugo spent a number of years in exile on Guernsey and it was during this time that he wrote several of his books. In recognition of Guernsey's hospitality, the French Government later decided to present the Island with a statue of the famous exile.

The statue by Jean Boucher was made in around 1913 for the Sociéte Victor Hugo. It was purchased by the French government for the sum of 30,000 francs (£1,291).

The statue was shipped to Guernsey on the French government dockyard steamboat 'Giraffe' and was unloaded at the Connaught Slip. From there it was transported to Candie grounds on a trolley pulled by a steamroller.

The statue was publicly unveiled in a ceremony on the 7th July 1914. A party of French dignitaries were brought from Cherbourg on the 'Vera' for the occasion which was also attended by Guernsey officials and thousands of islanders.

£250 was donated from the revenues of the Crown in Guernsey to help pay for the festivities for the inauguration of the statue.

The stone statue is mounted on a limestone base. This sits on a block of Jaonneuse granite which came from a quarry at L'Ancresse, Guernsey.

Originally, the pedestal was larger in size but this looked out of proportion with the statute. Monsieur Boucher was contacted and one of his assistants M. A. M. Trochu had to come from Paris to oversee the trimming of the base to the correct proportions.

Hugo is portrayed with a stick of bronze and hat in hand, his coat and scarf flying in the wind, his right hand tugging at his beard and his head down against the storm.

On the east side of the limestone block is a representation of Victor Hugo's signature. It also has the dates of his birth and death, 1802 and 1885.

The west and east sides of the limestone base have the following inscriptions:

'To the rock of hospitality and liberty, to that portion of old Norman ground inhabited by the noble little nation of the sea. To the island of Guernsey, severe yet gentle...'

Given from France to England and the island of Guernsey.

This monument, made by Jean Boucher, was unveiled 7 July 1914 by the Victor Hugo Society in the presence of M. Augagneur Minister of Education, Representative of the French Republic Government.

The inscriptions were incised by two Guernseymen W. Newbury and H. Bisson.

The statue is now a protected monument.