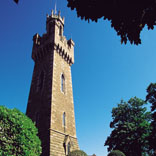 It was an exciting time see a lot of 'firsts' in the island.  Here's a timeline of some of them:

There would have been a big difference between life in St Peter Port and country parishes like Torteval or St Peters.  Some people in the country would only travel to Town once a year at Christmas. St Peter Port was still quite small in the early 1800s century with narrow alleyways and a few grand houses. The Rohais was the main route out of town and the High Street the only other major street.

By 1850 the island population increased by 50%.  This was mainly due to improvements in sanitation (people were living longer) and people coming to live here from England & Ireland.  A 'New Town' was built in the fields where Havilland Street and St John Street now stand.

Thomas Guille and Frederick Allès set up Guernsey's first library and museum in 1870. They were great collectors and some of their objects are on display at collection at Guernsey Museum.  Methodism took strong root in the islands after John Wesley came to preach here in 1787 and the movement grew in strength during the 19th century, with several chapels being built in the islands.

Is it true that Guernsey had its own army?

Yes.  All fit Guernsey men had to serve in the Guernsey Militia (the local army). Their job was to protect the island from invasion. In the 800s Sir John Doyle built new roads and many forts around the coast to strengthen the island against French invasion.The Guernsey Militia had over 3,000 men in its regiments. Militia parades were common sights and red-coated officers added colour to dances and social occasions.

Who were the famous people in Guernsey in those days?

One of the most famous Guernsey residents of all time is the French poet and author Victor Hugo.  He lived here from 1855 until 1868.  Hugo was living here in exile due to his opposition to Napoleon III. While he was here, he completed Les Misérables and Les Travailleurs de la Mer amongst other works. His bizarrely decorated home at Hauteville House is today open to the public.

William Le Lacheur (1802-1863) was born in the Forest and transformed the country of Costa Rica during his lifetime.

Frederick Corbin Lukis was one of the most influential Victorians in Guernsey.  He was born in 1788  had a love of learning from a young age.  Lukis had a large family and became one of Guernsey's most influential scholars.  He is regarded as a polymath (someone who has knowledge spanning a significant number of subjects).  Lukis had a lifelong interest in archaeology but he also studied sea life, plants and antiquities as well as prehistory. Later, he encouraged his children to follow his interests and their work and collections form the basis for the Guernsey Museum. You can see his original notebook and many of his finds at the museum today.  Download an activity book about his at the end of this page.

Did Queen Victoria ever come to Guernsey?

Yes she visited twice.  She came with her husband in 1846 and she visited alone in 1851.  Victoria Tower was built in 1848 to commemorate the visit of Queen Victoria and Prince Albert to the island in 1846. The visit was brief but was of great importance to islanders as it was the first by a reigning monarch.