October half term: It's A Viking Thing! 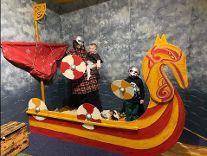 Join us from Monday 25 October at Candie for 5 days of Viking-themed activities.  Including:

* A different Viking craft every day in the Discovery Room

*  A trail around our current exhibition, Heroes of the Viking World

The fun continues on Saturday & Sunday with The Haunted Museum.

Normal admission applies, so it's FREE with your Discovery Pass.  All children under 12 must be accompanied at all times, including in the theatre.

More information about the film screenings:

Entry to the Theatre is included in your Museum entry price.  You do not need to book a seat and there is no obligation to stay for the whole film.  Due to our screening licence, we are not permitted to announce the film titles publicly.  They will be on display at reception from early October but if you would like to know the film title before coming, you are welcome to:

- join our private group on Facebook 'Guernsey Museum Films', where the titles will be announced.