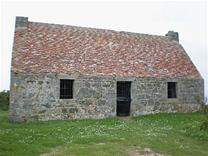 The watch-house was manned by men of the West (4th) Regiment who would have kept watch from 5pm to 7am. The approach of enemy shipping would have been conveyed to the Military Headquarters at Fort George by a chain of beacons erected along the island's coastline.

Situated high above Cobo Bay the watch-house would have had an excellent views out to sea and also inland across Guernsey. It is believed this position has been used as a lookout for centuries. The watch house seen today was built in 1780.

Built in 1780, this watch-house, destroyed by the Germans during the Second World War, is mentioned in Victor Hugo's book 'The Toilers of the Sea'.  The building features heavily in the Folklore Gallery at Guernsey Museum, where you can see an illustration by the artist David Wyatt.