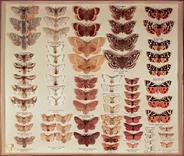 The majority of our zoological holdings originate from the Guille-Allès Museum, though a small proportion is thought to have come from the Lukis & Island Museum. More information about our relationship with these earlier museums can be found on the Geology page of this website.

A limited amount of material has been added to the collections since the birth of the modern service in the early 1970s. Most additions have involved specimens for specific display projects or relevant material to complement the existing collections. There is no program of systematic research collecting though we continue to accept legally acquired relevant material in accordance with our general acquisitions policy. Currently our main focus is on preserving and properly documenting the existing historic collection.

The material thought to originate from the Lukis & Island Museum is a poorly documented collection of mollusc shells. It includes both tropical and temperate species. The Lukis origin is fairly certain, since it is separate from the distinctively marked Guille-Allès material. This is further reinforced by the presence in the collection of three local Triton shells, one of which is marked as Frederick Corbin Lukis's 1825 specimen, described later as the first live Triton taken from British waters.

The major part of our zoological collection was inherited from the Guille-Allès Museum. The foundation of that institution in the mid 1880s coincided with the formation of the Guernsey Society of Natural Science who held their meetings in the Guille-Allès premises and enthusiastically supported the development of the new museum. From the outset it inherited the collection of the earlier Mechanics Institution (founded 1831) which included a substantial number of mounted bird specimens. These were added to in subsequent years as those involved with the museum sought to build up comprehensive reference and educational displays about all aspects of the local flora and fauna as well as the wider world. The result was a gloriously miscellaneous collection displayed in a way which became deeply unfashionable with the passage of time but which is still fondly remembered by many older residents. The stuffed Orang Utang, large crocodile and shark models have stuck in many people's minds to this day!

It has to be said that the passage of time and general lack of environmental controls compared to those we would expect in a modern museum did not best serve the Guille-Allès Museum's specimens. Breakdown and decay of organic materials is part of the natural order of things and arresting these processes on biological specimens in a museum has never been easy. When the library required more space for expansion in the late 1970s the Guille-Allès Museum collections were transferred into the care of the States of Guernsey's museum service. A condition assessment was carried out on the mounted birds and mammals with the result that many were discarded due to excessive fading or insect damage -or both.

The surviving collections cover a wide range both biologically and geographically. The principal elements are listed below,

Insects
The entomology collection is both extensive and probably the most scientifically significant segment of the zoological collection. The core of it is the collection of W.A. Luff (1851-1910) which was estimated to contain about 20,000 items at the time of its purchase by the museum in 1913. Luff was a very active amateur entomologist and contributed many lists of local insects to the annual Transactions of the Guernsey Society of Natural Science. In many cases these were the first published records for the island and the voucher specimens for those records are therefore in his collection. However Luff died unexpectedly and his notebooks did not accompany the collection to the museum, so the individual captures are not always as easy to verify as they might have been.

Mollusc shells
There is an extensive collection of marine shells, from both temperate and tropical waters, together with a much smaller number of freshwater and terrestrial forms. Many of these were originally on display and have identification labels but if location data is present it is much generalised

Other Marine invertebrates
As one might expect in an island museum, the collection has dried examples of local marine life such as echinoderms and crustaceans. There are also a few marine worms preserved wet in spirits. One of the early benefactors of the Guille-Allès Museum was John Whitehead (d. 1897) who was also its first Honorary Curator. He had been a trustee of the Mechanics Institution collection and was clearly a staunch advocate of museums. He financed the acquisition of many items but perhaps the most striking is an elaborate specimen cabinet containing examples of Channel Island crustacea.

Fish
Fish are well represented in the collection, as a mixture of plaster casts, models and some taxidermy pieces. Many of these were prepared or supplied by Jersey-based father and son biologists and preparators J W and J Sinel. The cast and skeleton of a rare Luvar caught in 1902 were prepared by Gerrards of London. A number of the plaster casts were restored and repainted in the early 1990s. They are displayed in the 'fishing' section of the Maritime Museum at Castle Cornet.

Birds
Having inherited the already notable collection of the Guernsey Mechanics Institution at the outset, the bird collection at the Guille-Allès Museum was extensive. Yet concern was being expressed about the condition of items in the Institution collection before the museum took them over in the 1880s and by the 1970s a professional appraisal confirmed that the passage of time and the conditions under which they had been kept had combined to render many of the items unfit for purpose. Although many items were discarded as a result, a substantial proportion of the collection has survived, including at least one specimen from a mid-nineteenth century donation to the Mechanics Institution by the Honourable Court of Directors of the East India Company. The collection includes a small amount of skeletal material and a representative selection of bird eggs - though there is little accompanying data.

Reptiles
The large crocodile has already been mentioned and there are various smaller examples, together with a few other tropical lizards and turtles. From closer to home we have mounted specimens of Channel island Green Lizards which were once common enough to be exported to the UK for the pet trade - until the practice was banned. Green Lizards are still part of the Guernsey fauna but rarely seen today.

Mammals
This is not a large collection, basically a few representative mounted specimens of small British mammals and a few more exotic mounts which the museum had acquired in its early years, including the Orang Utan, pair of Proboscis Monkeys and a Gibbon. There is a small osteology collection, which mainly consists of skulls and a small number of game heads - some are European and some from further afield. There are a number of marine mammal models two of which - a Porpoise and a Dolphin - have recently been restored and put on display in the Discovery Room.

Glass models
One of the more interesting groups of items in the Guille-Allès Collection is a small selection of marine invertebrate models made by the father and son enterprise of Leopold and Rudolf Blaschka in Dresden. It is not clear whether these were originally acquired by the Mechanics Institution or later by the Guille-Allès Museum itself. The Blaschkas were manufacturing their highly detailed models from 1863 until 1936 and selling them to museums and teaching institutions worldwide. The Guernsey selection includes jellyfish and sea anemones, most of which are awaiting specialist restoration and cleaning.

Illustrations
As much a part of the art collection as the natural history, a substantial series of illustrations by Frederick Corbin Lukis were originally bound into two large volumes and presented by him to Mary Anne, one of his daughters. The volumes stayed in the family until they were eventually acquired by the museum after being on loan to us for several years. Since the original bindings were in a poor state the decision was made to unbind and mount the sheets separately, so they could from time to time be displayed. The illustrations cover a wide range of natural history subjects, including fish, mollusc shells, insects and crustacea. A number of the works are available as reproductions via our Prints Online service.