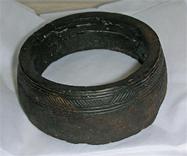 Who were the Celts?

They were a group of people who lived in central and northern Europe.  These people lived from approximately 750 BC to 12 BC. Originally, they came from Eastern Europe and moved westward - or at least their ideas moved this way. They lived during a time called the Iron Age. Interestingly, the word 'Celt' is a modern word and they would never have used it to describe themselves.

We think people would have lived in tribes, with a warrior at the head of each tribe.  It is possible that some islanders belonged to the following tribes:

* Coriosolites (from Armorica, which was the name given to modern Brittany and most of Normandy)

* Venelli (the part of France closest to Alderney)

Ancient writers tell us that the warriors who ruled tribes like these loved wine, feasting and giving fine gifts to their friends and guests.

People in Guernsey would have spoken a Celtic language.  To our ears it might sound a bit like modern Welsh, Breton or Gaelic.

Guernsey's harbour might have been a busy place in those days.  It provided a safe stopping-off point between Europe and Britain.  Ships carrying wine from Spain and the Mediterranean would have stopped here on their journey.

The most important discovery is a site at King's Road in St Peter Port, beside Acorn House School.  A roundhouse was found here, in addition to a small cemetery. This included three men buried with long iron swords at their sides and a woman with fine bronze circlets around her neck and arm. Warrior burials of this kind are found at a dozen other sites in Guernsey and could be of important leaders or chieftains. Sadly we do not know the names of any of these people. No warrior burials have been found in Jersey, which may mean that Guernsey was more important at this time.  It might also mean that the people in Jersey had a different way of burying their dead.

Other discoveries have been made which tell us about daily life in the island.  For example, we think people made salt by boiling sea water.  Evidence for this was found under the Markets in St Peter Port.

Many Celtic coins have been found in Jersey, but they are very rare in Guernsey. (Perhaps we will find a hoard, one day!) An important hoard of Iron Age silverware was found in Sark during the eighteenth century but has since vanished.

One of the earliest local Iron Age sites is a settlement on Longis Common, Alderney where pottery was being made. A small late Iron Age settlement at Les Tranquesous in St Saviour's is dated to 150 BC to AD 50, but the most exciting site is definitely King's Road.

A style of Celtic art and design known as 'Late la Tène' can be seen in objects found in Guernsey.

* The Iron Age display at Guernsey Museum, where you can see many of the finds from King's Road.