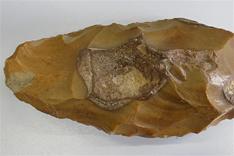 Take a more detailed look at the depth and extent of Guernsey's Archaeological Collection.

Guernsey has little archaeological evidence from the Palaeolithic period, and so the collections from this era consist almost entirely of antiquarian material obtained by the Lukis family: mostly hand axes and flint items from France. At the very end of this period, however, there was activity on the beach between Jethou and Crevichon, where flints are now exposed at the very lowest spring tides. The Museum holds a small collection of this material.

There is an important Mesolithic site on the island of Lihou which has been monitored and partially excavated since the 1990s. The flints from this site are stored in the Museum.

Guernsey Museum is strong in collections of Neolithic material, both from antiquarian excavations and collecting, and from more recent excavations on the island. The antiquarian collections consist mostly of stone tools, including about 250 collected from Guernsey during the nineteenth century. The finds excavated by the Lukis family at dolmens including La Varde, the Déhus, the Trépied and the Creux ès Fées, are also held at the Museum; some of these objects are on permanent display. The finds from several Neolithic sites which have been excavated more recently are also held in the Museum store, including the important early Neolithic site of Les Fouaillages. The Museum also has a substantial collection of flint debris, mostly picked up from coastal sites around the island.

Material from the Bronze Age is relatively scarce in Guernsey, although there is some pottery and flint from earlier prehistoric sites which were re-used in the Bronze Age. The largest single find of metalwork is the Alderney hoard, discovered in 1832. Almost all of the hoard is currently on permanent display in Guernsey Museum. There are several important Bronze Age items in the antiquarian collections, including a particularly fine halberd, also found on Alderney.

Guernsey is particularly rich in burials of the Iron Age, from a series of warrior graves found in the nineteenth century and more recent excavations at King's Road, St Peter Port. Some of these items are on display in Guernsey Museum and others may be examined by appointment in the Museum store.

Since the early 1980's our knowledge of the Roman period in Guernsey has been radically transformed. We now know that there was a significant Roman presence on the island, from the end of the first century BC through to the fourth century AD. Finds from the two main sites excavated in St Peter Port - La Plaiderie and the Bonded Store - are on display in Castle Cornet and at Guernsey Museum. A Roman ship was excavated from St Peter Port Harbour in the 1980s. Other Roman finds are kept in the Museum store, along with a small number of antiquarian items obtained by the Lukis family.

The Dark Ages - from the end of the Roman Empire to the ninth or tenth century AD - is the only period which is almost completely unrepresented in Guernsey's archaeological record. We have a single pot from the harbour, on display in Castle Cornet, which is perhaps eighth century in date.

The island flourished from the tenth century onwards, and its wealth and success are reflected in the large amount of finds of this period. Major sites on Guernsey include the castles - especially Castle Cornet - and ecclesiastic sites such as Lihou Priory off the west coast. Finds from excavations at these sites are on display at the Castle, and in Guernsey Museum. Most of the excavated material is available for study in the Museum store