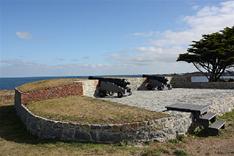 At one time, there were over 60 gun batteries in operation around the island.

They were constructed in strategic positions to protect the coastline from possible landings by the French. Typically they consist of a sloping paved stone platform to carry the ordnance, together with a brick or stone lined barrier as defence against oncoming fire. A number of batteries have been cleared of overgrowth in recent years and restored as historic sites.

A magazine building would originally have stood nearby to store powder and shot. In some cases the magazines still survive though the battery has been lost.

Built around 1793 to help protect the northern approaches and the channel between Guernsey and Herm. Originally it mounted two 18 pounder canon, but by 1816 mounted two 24 pounders and had been provided with a permanent magazine. The magazine lay to the west but is now lost.

This battery mounted three cannon. There is an associated magazine behind the gun emplacement.

This battery platform, situated above Fermain point had an associated with magazine and watch house.

Address: Accessible via footpaths from Fermain Bay and Becquet Road, St Peter Port.
Perry's Guide: 31G1
Parking: There is no public car park nearby. On street parking may be possible in Becquet Road.
Bus Routes: 11, 91

Records from 1801 show that the battery had two 20 pounder cannon. By 1816 it was equipped with 4 cannon plus a permanent magazine. This vantage point was utilised by the German forces during the Second World War. View site information sign...

This battery formed part of what were the outer defences of Fort George, Guernsey's major military headquarters from the late 1780's. It was known as Terres Point Battery in 1787 but was named Clarence Battery in honour of George III's son in 1815. Many features built in the 19th century can still be seen although some alterations were made during the Second World War as this continued to be an important defensive position.View site information sign...

This battery was at the site of the Delancey barracks. In 1801 the battery mounted two 20 pounder cannon. The barracks no longer survive but from this high vantage point the battery has spectacular views along the eastern coast of Guernsey. View site information sign...

This substantial battery is associated with Tower 15 at Fermain and a magazine.

Constructed c.1779 it was armed with three 24 pounder guns and was serviced from a powder magazine located some distance from the battery. The battery was altered by the German occupying forces during the Second World War. Young and old will enjoy exploring the gun positions and trenches across the site.

The right and left batteries were constructed in 1796 and have commanding views over Vazon Bay. The batteries would have been manned by the North (2nd) regiment of the Guernsey Militia with each battery supporting two 18 pounder cannons.

Address: Rue de la Hougue, Castel.
Perry's Guide: 14D2
Parking: There is no dedicated parking. It may be possible to park nearby but please do not block the road.
Bus Routes: 42, 111

In 1801 this battery mounted two 18 ponder guns; it would have guarded the northern side of L'Eree Bay. Today two cannons stand on the site guarding the headland. There are spactular views over to Lihou Island and towards Pleinmont Point.

Situated close to the Chouet Tower this battery would have guarded Grande Havre and the Braye du Valle which once separated the Clos du Valle from the rest of Guernsey. The two platforms make up the battery and each would have accommodated one 24 pounder cannon.

High on the cliffs at Jerbourg this battery overlooks the inaccessible Havre des Moies Bay.

In 1816 the battery mounted one 20 pounder cannon and had a portable magazine. The defensive parapet has not survived.

This battery overlooks the south coast of Guernsey and had three gun emplacements.

This battery dates from at least 1816 and evidence for a small building to the rear indicates that it may have had a magazine. It may have been superseded by Jerbourg Battery on the higher ground to the west.

Mont Chinchon battery was also known as Druids Altar Battery due to its close proximity to Le Trepied dolmen. In 1801 the battery had two 20 pounder cannons which would have been manned by the Guernsey Militia. A magazine was also recorded in 1816, which would have held black powder and shot for the guns. The site was dismantled by the German occupying forces to make way for more modern defences. The construction of a cutting for a railway line also damaged the rear of the battery and the magazine. After the 1940's the battery fell into disrepair. In 2006 work began to restore the battery and was completed in 2008. View site information sign...

This small battery was also known as Narrow Point, Narrow Port or Grade Port Battery. It consists of a small platform which mounted a single 9 pounder gun.

This battery is situated on the eastern side of L'Ancresse Bay. It was associated with Tower 5 and has a magazine.

This battery provided extra protection to Perelle Bay as it sits between Mont Chinchon Battery and Fort Richmond. It mounted two 20 pounder guns in 1816 and originally had its own magazine but this has been destroyed. The battery has been partly reconstructed.

Situated high on Pleinmont point this small battery would have had a strong defensive position. In 1816 it mounted one 18 pounder gun.

This battery had one gun position which was protected by a small parapet. It was armed with one 20 pounder gun. It did not have an associated magazine but rather would have been serviced by a portable magazine.

At Rousse the tower and battery are uniquely combined in a single fortification. It stood guard over the western approaches to the Braye du Valle which once separated the Clos du Valle from the rest of Guernsey. In 1816 the battery had three 24 pounder cannon and two nine pounder cannon. Replicas of these guns can be seen at the site today. This battery has an associated magazine to the south west. View site information sign...

This battery would have been manned by the South (3rd) Regiment of the Guernsey Militia. In 1803 this battery had two 24 pounder cannons.

This battery has an associated magazine. In 1816 this battery mounted two 24 pounder guns.