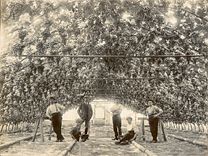 The people of Guernsey have always been resourceful, often having more than one source of income. A quarryman might keep a cow, a fisherman might grow a few tomatoes, a farmer's wife would knit stockings whilst the farmer would crush apples in a big granite trough to make cider. During the tourist boom, a family might also run a guest house or holiday chalet.  Here are some notable industries of Guernsey.

Guernseymen have maintained small farms for centuries. There are no real villages and few large farms. The land has traditionally been fertilised by spreading 'vraic' (seaweed) on the fields. Much land in the high parishes (in the south of the island) was once used for growing wheat.

Before the 1700s, pigs and sheep were the most common domestic animals to be seen in Guernsey. The familiar, friendly-faced Guernsey cow only emerged during the 19th century as a special breed. It was decided in 1819 that the breed must be protected and it is the only breed whose cows can be reared in Guernsey today. The Guernsey cow yields less milk than big modern dairy breeds, but the milk is rich and produces a famously yellow butter. After the Great War, dairy farmers found it difficult to make money and the industry began to decline. Guernsey milk, butter and cheese is rarely exported now, but can be enjoyed by locals and tourists.

In the 1800s a lot of Guernsey people moving from farming to growing.  This partly explains the look of the island where houses are built along the main roads, interspersed with small fields or glasshouses.

In the 1800s, grapes were grown in glasshouses known as 'vineries'. Tomatoes were grown as a second crop underneath the grapes, but by the 1900s it had become the main crop. Between the wars, a quarter of the island's men were 'growers' or worked in the vineries or made 'chip baskets' to carry the fruit. The Guernsey tomato was known as the 'love apple' and then later advertised as the 'Guernsey Tom'.  The tomato was a symbol of the island well into the late 1900s. The industry declined because it couldn't keep up with competition from other European countries.  Local shops and hedge stalls still sell tasty home- grown Guernsey Toms. Flowers are now the main crop grown in the island's vineries. See below under 'document downloads' for:

- a Guernsey Tom Activity book, which includes many photos

The heyday of the Guernsey knitting industry was during the Tudor times and the famous 'Guernsey' jumper is based on a Tudor knitted shirt.

Women and children worked at home knitting stockings to sell to Guernsey businessmen who sold them around Europe. According to letters between Matthew and Michael de Saumarez in the 1600s 'bas a canon' were the most popular. These were long stockings for men worn with knee length trousers decorated with lace and ribbon. A boy could make a career from knitting. To qualify as a master knitter he had to knit stockings, a bonnet, a blanket and a woollen shirt. Knitters also made up patterns such as 'waves' or 'swans' which became more complicated as the fashion changed.

Royal Approval Mary I accepted 'four wastecotes (shirts), four sleeves and four pairs of stockings of Garnsey making' in 1556. This was a gift from the Governor of Guernsey Sir Leonard Chamberlain.  Later, Queen Elizabeth I paid 20 shillings for a pair of Guernsey stockings embroidered with silk.  Mary Queen Of Scots wore a pair of white Guernsey stockings when she was beheaded in 1587.

A wave of ship-building in Guernsey took place after the Napoleonic Wars ended (in 1815). Shipyards began at Havelet Bay and ran along the front between St Peter Port and St Sampson's. Some 300 ships were built in the 1800s. Guernsey ships carried stone to England and were also used to carry other British goods, especially coal. From 1850, the wooden sailing ship could not compete with the iron steamer and the ship-building industry quickly came to an end. See below under 'document downloads' for more information on shipbuilding.

Guernsey's stone has been used since the time of the dolmens. The Blue Granite, or diorite, is an especially good building stone. Quarrying grew quickly in the 1800s, with over 200 quarries being active at times. The granite was usually shipped from St Sampsons harbour to England, where it was used on London Bridge.  Stone from the islet of Crevichon (just off Herm) was used in St Paul's Cathedral. Almost half a million tons per year was being quarried by the early 1900s and the north of Guernsey at that time looked very 'industrial'. When the Great War broke out in 1914, Guernseymen were recruited into special quarrying companies of the British army.

A tourist industry developed in the early 1900s but the boom really took place after the Second World War.  Hotels were built and houses converted to guest houses to meet the demand and tourism came to employ 1 in 4 of the workforce. Tourists were attracted to Guernsey because it was warmer than England, with stunning beaches and a flavour of France.  The tourist boom was encouraged by 'duty free' watches, tobacco and alcohol. One tourist in six now comes from Europe, especially France. Over the centuries, many French men and women travelled to Guernsey for seasonal work and some settled here. Dutch growers brought their skills to the vineries and Italians came to work in the tourist trade. In the 1980s, workers from Madeira and Portugal came to work in horticulture and tourism.  See below under 'document downloads' for:

Banks have operated in Guernsey since the eighteenth century and The Guernsey Savings Bank was founded in 1822 at the suggestion of Admiral Saumarez.  Kleinwort Benson became the first 'merchant bank' to be here in modern times, in 1963.   Business boomed and by 2008 close to 50 banks and almost 1,000 investment funds were based in Guernsey.  Guernsey's finance industry was so successful that by the start of the 21st century it created almost two-thirds of the island's wealth and employed 1 in 4 of the workforce (the same as tourism did previously).

Over the years Guernsey has been able to charge lower duties and taxes than elsewhere. Keiller's Marmalade was made here between 1857 and 1879 to escape the duties on sugar and to keep their recipes secret. Tax is however no longer the main reason finance companies come here. As a small island, Guernsey is able to write laws that encourage business and can do this quickly when new ideas arise. Companies based in London, New York or other major financial centres find it useful to have offices in the island.  People are not allowed to hide their money in Guernsey in order to evade taxes they are legally obliged to pay to another government.  The Guernsey Financial Services Commission was set up in 1987 to regulate the finance industry.