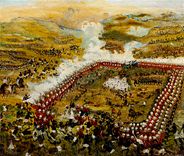 The Battle of Abu Klea

Occasionally there are paintings in a museum collection that involve some detective work. The subject might be an unknown sitter or, as with this battle scene, an unknown event. Part of a curator's job is to solve some of these riddles. Often there are not enough clues and the mystery goes unsolved.

However, in this naïve but incredibly detailed battle scene we have many clues. It most probably depicts the Battle of Abu Klea which took place on the 17th January 1885. It was one of the battles from the Sudan Campaign launched to rescue General Charles Gordon besieged in the capital, Khartoum.

Background to the Battle

In 1884 Mohammed Ahmed (known as The Mahdi) began a revolt against the Khedive of Egypt, the ruler of Sudan, who then evacuated his garrisons. Following this decision General Charles Gordon was appointed to conduct the withdrawal from Sudan. General Gordon instead prepared to defend Khartoum, which was under siege from March 1884 until January 1885.

General Lord Wolseley was given command of the Sudan expeditionary force to rescue Gordon. It was clear to Wolseley that to reach Khartoum in time he needed a 'flying column', which was a small unit capable of rapid mobility. This came in the form of the newly formed Camel Corps, plus infantry of the Sussex Regiment, the 19th Hussars on horses, three Royal Artillery guns and a Royal Navy detachment with a Gardner machine gun.

Major General Sir Herbert Stewart led the Camel Corps across the desert heading for the wells at Abu Klea. As they approached the wells it was clear that a large Mahdist force was there. Stewart stopped to camp two miles away, deciding to advance the next day in a square formation with all the camels in the centre. As the square moved forward under fire it started to break up. At around 9.30am a large force of around 3,000 Mahdists, armed with spears and swords, attacked the square.

It is probably this crucial point in the battle that our painting depicts!

The Gardner gun was brought through the British infantry and opened fire, but unfortunately it jammed. This allowed the Mahdists to break into the square, but they were impeded by the mass of camels. This gave the British troops an opportunity to turn around and open fire on the Mahdists who then retreated. The battle only lasted 10 to 15 minutes. By 4pm the square had reformed and reached the wells.

Unfortunately the Corps reached the Nile two days too late. On arrival they learnt of the fall of Khartoum and the death of General Gordon on 26th January. The British withdrew from the Sudan, which left it under the rule of the followers of the Mahdi for the next thirteen years.

We are still carrying out research to determine if the creator of this painting, J. Le Page, took part in this famous battle and was in fact depicting the very battle he fought in. So the mystery has yet to be solved completely.