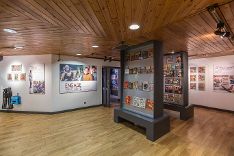 We boldly went where we had never gone before!

Crossing the universe, the Museum's most ambitious exhibition of 2017 celebrated the imagination and excitement of science fiction. Art, movies, books, comic strips, models, toys, merchandise and props were on display across all our temporary display space. From Dan Dare to Han Solo, the Mekon to the Daleks, we explored the future - and the way 'the future' was imagined in the past.

Matt Harvey, Social History Curator said, "I'm particularly thrilled with this exhibition. The Museum has been incredibly lucky to find some amazing objects from collectors in the UK and the island. Material both from and inspired by some of the classic science fiction series of the last few decades has been brought together to create a fantastic visual feast."

Tying in to the science fiction theme, the visionary artist Chris Foss featured in 'Warp 2' in the greenhouse gallery hosted by the Guernsey Arts Commission. Locally-based artist Foss pioneered the classic  'look' of science fiction book covers in the 1960's and has so far produced over 1,000.

Helen Conlon, Fine Art Curator commented, "Foss' unique approach revolutionised sci-fi art. He created other worlds that were convincing. His spaceships, cities and landscapes contain a raw reality, influenced by subjects such as war photography and local German fortifications. His work on films such as Alien and Flash Gordon illustrate his skill at grasping concepts and then bringing them to life on paper."

All the exhibitions were open from Friday 22nd September 2017 until the end of the year.